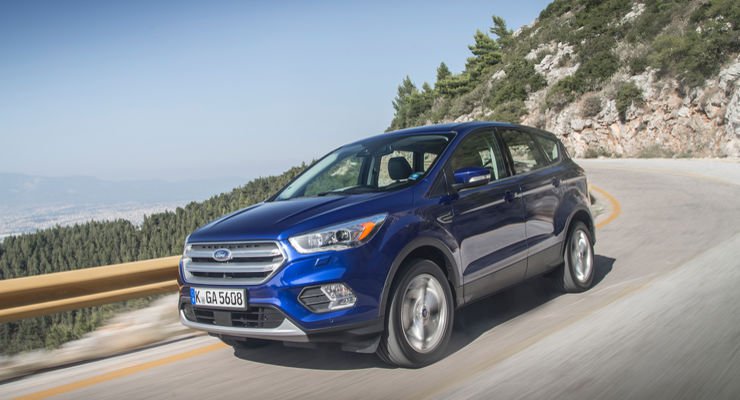 Ford’s second-generation Kuga gets a mid-life facelift for 2017, but other than the refreshed looks the story is much the same as before. It’s decent to drive, but not the most engaging in its class, while there’s plenty of kit and the diesel engine is capable.

Going against the current trend, the Ford Kuga is more SUV than crossover. This is demonstrated by a range that offers a lot of four-wheel drive choices, meaning it’s more useful in the rough stuff than some.

Smart styling, that spacious interior and plenty of standard equipment count in its favour, though the Kuga’s infotainment system isn’t the easiest to operate, and the dash looks and feels quite low-rent. The new looks mean it’s more distinctive and handsome, but overall the Kuga is starting to feel old next to the SEAT Ateca and Peugeot 3008.

The Kuga is the middle child in Ford’s SUV lineup, occupying the space between the Fiesta-based Ecosport and the recently introduced Edge. The Kuga is based on the same platform as the Focus hatchback, and takes on popular large crossover rivals like the Nissan Qashqai, Honda CR-V and Mazda CX-5.

Front and four-wheel drive models are offered across the range, with the 4×4 versions getting Ford’s Intelligent All-Wheel Drive system, which diverts power to the wheels that can best use it.

In the engine bay there’s a choice of Ford’s EcoBoost turbo petrol and Duratorq TDCi turbo diesel engines, the latter making up the majority of UK sales. There’s a choice of a twin-clutch PowerShift automatic or manual transmissions – depending on which engine you choose.

Zetec is the entry-level car, then there’s Titanium, Titanium X and Titanium X Sport. ST-Line is the sporty variant, and the Vignale tops off the range. Standard kit even on base models is good, while top spec cars come with niceties such as sat-nav, heated electric leather seats, a suite of driver assist systems and adaptive cruise control.

Petrol and diesel choices, but it’s the 2.0 TDCi that makes up the majority of sales, for good reason

The Ford Kuga used to be one of the better small SUVs to drive, but these days it’s merely up to par rather than outstanding. It’s not bad to drive, but the SEAT Ateca is a more composed and agile SUV in the bends.

The power steering system in the Ford Kuga is now fully electric and while it saves on running costs, it has sacrificed feedback. It’s consistently weighted, though, which is a plus. The gearshift is slick, too.

Despite the body roll control system fitted as standard across the Ford Kuga range, there’s still plenty of lean in the corners. This is primarily a result of suspension that has been set up for comfort rather than cornering ability.

Of course, the benefit of that is a composed and comfortable ride. That’s true on Zetec and Titanium models with their soft suspension and modest wheel size, though the stiffer setup on ST-Line models introduces a firm feel over bumps.

The 2.0-litre, four-cylinder TDCi engine on offer is available in two states of tune, 148bhp or 178bhp, with the lower output version offered in either front- and four-wheel drive – the more powerful unit is four-wheel drive only.

There’s also a 118bhp 1.5-litre diesel, as well as a 118bhp petrol EcoBoost engine of the same displacement, with 148bhp and 180bhp petrol options also available.

The 148bhp 1.5-litre EcoBoost petrol engine is mated with either a six-speed manual gearbox or a dual-clutch PowerShift automatic. The manual gearbox is well-weighted and pleasing to use, so while the auto isn’t bad it isn’t ideally suited to this engine choice.

Most should go for the 148bhp or 178bhp 2.0-litre diesel models as they offer the best combination of power and efficiency. Both are smooth with noise levels well isolated from the cabin and deliver decent in-gear pace, with either manual or automatic gearboxes.

Diesel’s your best best for good fuel economy, though it’s no longer up there with the best

If running costs are your priority, then go for the front-wheel-drive Ford Kuga with the 1.5-litre deisel with 118bhp, as it returns 64.2mpg and emits 115g/km of CO2. Even the more powerful 2.0-litre TDCI engine with 148bhp returns a respectable but not exceptional 60.1mpg, plus emissions of 122g/km of CO2.

Four-wheel-drive isn’t available throughout the Ford Kuga range, and only cars with the 180bhp 1.5-litre EcoBoost petrol engine, and the 2.0-litre TDCi diesel units benefit from the extra traction. 54.3mpg is the best an all-wheel drive Kuga can manage, which means it’s only worth going for if you really need the four-wheel drive grip.

The Kuga is better-looking than before, but lags behind on the inside

A facelift in 2016 saw the ageing Kuga get a much more distinctive and handsome look, with the larger grille seen on the Ford Edge now sitting on the front of the car, and a new set of head and taillights giving it a more interesting appearance overall.

It’s a different story on the inside, as the facelift hasn’t changed enough to allow it to keep up with newer rivals. The SEAT Ateca and Peugeot 3008 both have much more classy and interesting cabin designs, with the Kuga starting to look rather ugly and dated.

The SYNC 3 infotainment system is much better than before, but it still looks a little old-fashioned in terms of grahpics and is fiddly to use while on the move thanks to its in-set dash position. Still, there’s loads of kit in the Kuga.

Go for the Ford Kuga Titanium and you get a gloss-black grille surround, part-leather seats, automatic headlights, dual-zone climate control, the Ford SYNC phone voice-control system and a DAB radio.

The Ford Kuga Vignale offers buyers a top-spec car that’s supposed to rival premium rivals such as BMW or Mercedes, but in reality it’s an overpriced Kuga with some extra leather seats and some extra kit – we’d advise avoiding this one.

The Kuga’s info and entertainment system isn’t the most user-friendly out there. The entry-level Zetec comes with Bluetooth and USB connectivity as well as a DAB radio but it’ll take time to come to terms with the controls. At least the phone pairing process is not too fiddly and once it’s done the system should remember your phone.

More upmarket models gain a touchscreen sat-nav, but again it’s not the most intuitive system to use. Sound quality on all models is decent, if not exceptional.

Good passenger space, but boot space, while improved, is bettered by some rivals

The Kuga’s driving position is pretty good, the steering wheel moving for height and reach, while the pedals are well positioned, as is the gearstick for the standard manual transmission. Stowage is good, if not class leading, you need to go for Titanium trim and above to gain a useful centre console cubby with a 12-volt plug socket.

One thing to note is that the seats fold flat, but not on the more luxuriously-upholstered Vignale version where there’s a bigger step that will make it tougher to load in longer items easily.

The Kuga doesn’t feel too big compared to its rivals, its height giving you a useful view over traffic ahead. It feels longer than most, looking a bit like a tall estate car rather than a chunky SUV or crossover. That’s to its benefit in traffic, where you feel more confident threading it through gaps.

Passenger space in the Kuga is good for four adults but the fifth middle seat is a bit of a squeeze unless you’re all very friendly. Headroom and legroom are good too but the panoramic roof – standard on some models – could be a problem for taller passengers. Visibility is generally decent all round.

Comfort is good, the seats supportive with lots of adjustability, and the rear seats can be reclined for greater comfort in the rear. Isofix child seat mounts feature on the outer two seats if you’ve little ones to fit in.

The Kuga still has a reasonable 456-litre boot, while the rear seats fold down easily to reveal a 1,603-litre load area that’s nice and flat.

The Ford Kuga has a smaller boot than a Volkswagen Tiguan and Honda CR-V, while even the smaller SEAT Ateca and Peugeot 3008 beat it for space. Furthermore, the spare wheel option decreases boot space to 406 litres, giving it 97 litres less than a Mazda CX-5.

There’s a compartment under the floor in the boot for secreting away items out of sight. If that floor panel is in its high position and the seatbacks down the load space is flat, the seats themselves folding in a simple one-hand operation across the entire range. There’s a low loading lip as well, so getting items in and out is easy.

A five-star EuroNCAP crash test rating should reassure you if you’re buying the Kuga as a family vehicle. The standard safety equipment list is lengthy, with ABS, Emergency Brake Warning, driver and front airbags, a driver’s knee airbag, front side impact airbags and front and rear curtain airbags all as standard.

Quality inside and out feels and looks to a high standard, but the Kuga placed 45th in the 2016 Driver Power survey, one higher than the Mazda CX-5. However, it’s listed as 107th for reliability, which was owners’ second biggest concern with the car – apart from running costs.

These days Ford’s three-year/60,000-mile warranty looks pretty ordinary compared to the five and seven-year offerings from rivals like the Hyundai Tucson and Kia Sportage. In the first year of ownership there is unlimited mileage UK and European roadside cover and unlimited paint cover  and a 12-year unlimited mileage perforation warranty is standard.

The Kuga needs servicing every 12,500 miles or annually, whatever comes soonest, with major services every two years or 25,000 miles.

Ford offers a fixed-price servicing package, with two- and three-year deals offered for £390 and £590 respectively. After that Ford offers a £125 annual minor service, or £195 major service package via Ford Motorcraft 4+ service options.

This an review of the latest Ford Kuga SUV,  check the full review at http://www.autoexpress.co.uk/Ford/Kuga