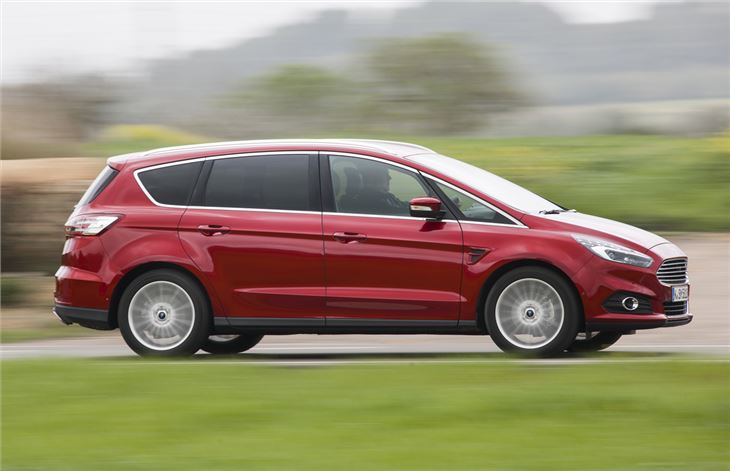 There’s something about the S-Max. Not being an MPV person by the simple expedient of not having any kids, many of these vehicles do absolutely nothing for me, based as they are on the premise of practicality rather than any particular driving dynamic. The S-Max is different, though.

The car has been with us since 2006, and in 2007, it was voted as the European Car Of The Year — an award it thoroughly deserved as an innovative and fresh addition to the legions of dull-as-ditchwater MPVs already out there. Indeed, that was one of those rare occasions when such gongs actually get awarded to a deserving recipient.

Not alone has it always been a strikingly good-looking piece of kit, but it is also endowed with genuine driving abilities and, as such, provides something of a unique at-the-wheel experience for those drivers who actually appreciate such things.

Indeed, so good a driver and handler is this machine that Ford — somewhat cheekily, I thought — took advantage of the excellent reviews which praised this aspect of the S-Max character to claim it was less of an MPV and more of an SAV.

Now, there is a hell of a difference between a mere people mover and a sports activity vehicle, but you sort of had to admire Ford for pushing the boundaries a bit with their description of the S-Max, as they were, after all, only reflecting the views of the motoring hacks who had driven it and been impressed. They were also trying to distance the car from the well-established Galaxy range which had been the company’s MPV standard-bearer for some time.

The second generation of the car was launched at the Paris Motor Show last year and has now arrived on Irish shores ready to carry on the mantle of its highly regarded predecessor and I have to say it was with a considerable degree of anticipation I awaited its arrival.

I did entertain mild concerns that, having created something which was so right from the outset, Ford might have difficulties replicating the success, but I’m glad to report such fears were largely wide of the mark.

Chiselled good looks were always part of the deal with S-Max and, in fact, the original car was the first to display Ford’s ‘kinetic design’ philosophy, something which was subsequently applied to all the company’s mainstream models and which stood it in good stead. Ford has tricked around with the look of the car for its second iteration, but it is still very definitely recognisable as an S-Max.

There has been some criticism of Ford’s decision to give the car a longer bonnet by moving back the A-pillar, but in my view this has added to the car’s stature and made it even more pleasing on the eye, particularly from the profile viewpoint.

From a practical point of view, some drivers might be a tad uncomfortable with the longer bonnet, particularly in parking situations but, like anything else in life, you do get used to it.

The raised chrome trapezoidal grille (Aston Martin, anyone?) is a feature that by now characterises the front end look of a Ford and is also pleasing on the eye, as are the new, slimmer, headlights. There is also a neatly tapered look about the rear end which adds greatly to the suspicion that this is not your normal school-run family roustabout.

Inside, the S-Max will seem to familiar to anyone who’s sat in a Mondeo as the two share much cabin architecture. That is no bad thing either as the quality of the materials is top drawer and the dashboard layout up there with the best in class.

The design is centred with the 8” touchscreen of Ford’s SYNC2 infotainment system and the whole layout is balanced, easy to use and assimilate.

In terms of interior space, little has changed with regard to the practicality of the car. There are still seven seats and while the rearmost row is best suited to kids or small adults, even though the headroom here is a lot better than the sloping roofline would have you think.

The sliding middle row eases access to the third row and the recessed door sills make that even easier again. With all seats down, cargo space is ginormous, but even with a full passenger load on board the S-Max has enough room for a few suitcases or such — more than can be said of many opponents.

On the engine front, things are fairly familiar to anyone acquainted with the current Ford line-up. In this case, it was the two litre four cylinder TDCi turbodiesel with some 180bhp available and I can tell you without equivocation that the engine and chassis are well matched.

The engine, which is allied to a six speed ‘box, will propel the car to a top speed of 211km/h and a 9.7 second 0-100km/h time. The latter figure might not seem eye-popping, but the mid range strength of the engine just has to be experienced. The 5.0 l/100km (56.5mpg) is not to be sniffed at either.

That the S-Max is based on the Mondeo platform is a good thing as it should provide the basis for a decent drivers’ car — much like the old one was. And indeed it does. I have seen criticisms that the new version is not quite the demon handler the original was, but I’d have to say if there is any difference it is miniscule.

The integral link rear suspension, I felt, made the car a little more taut than previously and also provided more refinement for the rear passengers — less road noise and better ride quality — while also giving the driver the benefit of a chassis which has to close to the top of the class here.

Sure you can allow the power available to get the better of the car if you’re too pushy with the loud pedal, but any sort of moderate approach will show off a vehicle which will flow through corners with impressive élan and plenty of confidence.

In Titanium trim, which includes a Santa Claus-sized bag of goodies, including the aforementioned SYNC infotainment and connectivity system, Ford’s intelligent speed limiter technology (which incorporates the frankly annoying speed limit sign recognition system), auto lights and wipers, dual zone air con, Ford’s MyKey system — how to stop the elder licensed kids being too bold, basically — and a whole host of other stuff.

I was not in any way disappointed by the S-Max and I didn’t expect to be either. It was always a great family car which oozed practicality and usefulness while also offering the sort of potential driving enjoyment so many others in the class lacked.