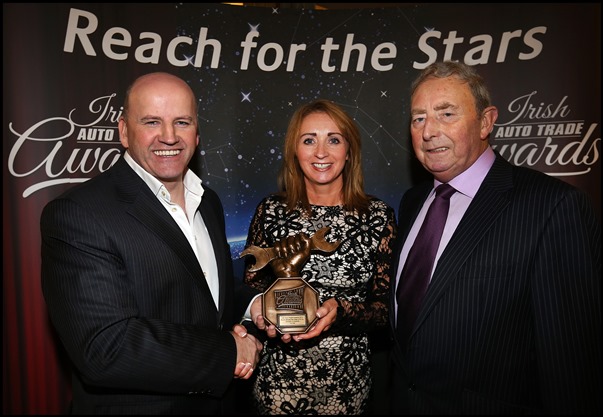 Cavanaghs of Charleville was honoured with no less than two awards – at separate events – in recent weeks.  Its commitment to customer service was formally acknowledged when it picked up the ‘Aftersales Dealer of the Year Award’ at the Irish Auto Trade Awards held in City West Hotel, Dublin, on the 9th November. This was followed soon-after by Cavanaghs being nominated, and winning, the ‘Best Large Business’ award at the Charleville Chamber Awards Night which was hosted at the Charleville Park Hotel on November 15th.

The first award, which was organised by publishers to the Motor Trade, Automotive Publications Ireland, was the culmination of a thoroughly researched and independent process which saw dealers being selected from each of the four provinces. Cavanaghs went forward against other well-known dealerships from around the country and succeeded in winning the category outright – against stiff opposition. These were the inaugural awards created by Automotive Publications making Cavanaghs the very first winner of this award. This follows a similar success that Cavanaghs recorded in 2011 when it also won the inaugural Society of the Irish Motor Industry (SIMI) ‘Franchised Dealership of the Year’ award. The Auto Trade award was gratefully received on the night by Managing Director, Martin Condon, and Aftersales Manager, Gwen Linehan – who maintains overall responsibility for the Aftersales function at Cavanaghs.

The Auto Trade award was followed-up six days later when Cavanaghs scooped the ‘Best Large Business’ award at the Charleville Chamber Awards night which was held at the Charleville Park Hotel on Saturday, November 15th last. Once again Cavanaghs was selected as the overall winner in the ‘Large Business’ category which was appreciatively accepted on behalf of the entire company by Managing Director, Martin Condon. Furthermore, this too was the inaugural set of awards making it a hat-trick of first-time wins for Cavanaghs which must be a source of satisfaction for all connected to the company.

Managing Director, Martin Condon, had this to say on accepting both awards: “To win one award would have been very satisfying but to win not just one, but two, is a source of huge satisfaction to me and to all the team and is one of my proudest moments as a Director of the company.  It also makes us appreciate what good team members we have here at Cavanaghs and how they buy into the provision of excellent service across all aspects of the business.  Cavanaghs is heading for 50 years in Charleville and we can take some credit for contributing to employment, the community and, of course, our achievements as a Ford Dealer to the point where we are now probably the largest Ford Dealer outside of Dublin. We have earned the respect of our peers through maintaining our adherence to our core customer service values.”

Coming off a very challenging period in the motor business, no doubt these awards will be seen as a welcome tonic to the management and staff of Cavanaghs. A telling factor in both awards was that the nomination, evaluation and ultimate selection process was entirely carried out by third parties which therefore provides an independent validation of Cavanaghs customer service policy and demonstrates the company’s ongoing commitment to customer care.

Pictured above (L-R) at the Irish Auto Trade Awards were Sean Gallagher (Master of Ceremonies) with Gwen Linehan (Aftersales Manager) & Martin Condon (Dealer Principal) from Cavanaghs of Charleville accepting their award for Aftersales Main Dealership of the Year 2015.

Pictured below at the Charleville Chamber Awards night was Michael Murray (of Murray Cloney Associates – Awards sponsors) presenting the Award to James Foley, Sales MAnager at Cavanaghs with Martin Condon (Dealer Principal) for their award for Best Large Business.